Scene: Bedroom walls a pale yellow, ceiling a glossy white. In the center, a white crib that looks like it has cradled infants before, the chipped paint reveals patches of bare wood. The crib door is opened and a blue and yellow blanket ornamented with teddy bears, hung halfway outside, partially covering the unmade rumpled bed, the imprint of the baby's form still visible on the mattress. Like the blanket, the tiny matching pillow case looks worn although clean. Everything in the room look like hand me downs or like they were purchased second hand. The fresh scent of baby powder is fading amidst the odor of souring diapers, seen in the make shift garbage box at the foot of the crib. Not a toy is visible anywhere. At the head of the crib is a chest, the drawers are wide open. Nothing was in them except a piece of crumpled blue tissue in the top drawer. Next to the chest is a closet the door half opened, it too, was empty. Against the wall, alongside the foot of the crib is a cushioned wooden love seat the hair line cracks long and visible in the worn leather. Eight pictures of a baby boy lined the wall facing the door of the empty crib. They are labeled in time from the day he came home up to his two year birthday.  Across the floor on the window ledge of the only window in the room, a feeding bottle half full of baby formula. The bedroom door opens directly into the shabby living room and overlooks the sofa which is situated beneath the curtained double windows; its tattered seat exposing the foam of the cushion, to the right of the sofa further along the wall a door that leads directly to the street.

IRVINA: (Standing by crib, nervously running index finger back and forth along crossbar that
supports frame of head of crib)
GRANDMA MABEL, DAISY and KYLE (Standing in doorway of bedroom)
KYLE: What’s this about Irvina? (Kyle’s voice harsh and stern). Why you called us up here to Nora’s             house, what you can’t tell us over the phone?
GRANDMA MABEL, DAISY and KYLE: ( Simultaneously attempt to advance further into bedroom             but without them being fully aware Irvina quickly stood in their way in an attempt to stall them)
DAISY: Where Nora is anyway? The place seem quiet. Little Joshua sleeping?
IRVINA: No not really…. (Irvina fumbles for words). No him not really here Miss Nora took him for a
walk.
GRANDMA MABEL and DAISY (Push past Irvina, look around the child’s room, get the picture and
look at each other mouths wide open. Irvina continues to block Kyle from fully entering the room.
KYLE: (Kyle a very tall man of five feet nine inches looks over Irvina’s five foot petite frame and
surmise that something was not quite right.)Took him for a walk! Where! At this hour? For gods sake Irvina what going on?
IRVINA: (Irvina voice high pitched almost to the brink of tears.) Well Mr. Kyle I don’t think she             coming back.
KYLE: (Pushes Irvina aside and walks in)  What the hell you mean you don’t think she coming back?
She went away to her mother for the week end or something? Of course if……
IRVINA: (cuts him off) Yes sir, no sir, me no know sir (Irvina answered confusedly)
KYLE: Irvina stop act like a Ninny and answer the damn question! (Kyle a husky man in his mid

thirties moves in further and peers at the empty bed.) Look at this crib me give her plenty of

money to allow me son to live comfortably. She ‘bout she don’t want blood money.  She will

GRANDMA MABEL: Kyle calm down, me sure there is a rational explanation.
KYLE: Mama, what the hell kind a rational explanation?  It look like Nora done took the baby.
DAISY: Took the baby! what you mean took the baby?  What’s wrong with a mother taking her own             child for a walk?  A mean it’s not that late (looks at watch) only nine O’clock she might come             back…. (Daisy tails off.  She was trying to placate her bad tempered brother, even though she
is aware that from the looks of the room there was a situation)
KYLE: What the hell you think me mean Daisy?  Me seh she took as in kidnapped me son. (he  wipes
right hand over face and shakes head in disbelief)
GRANDMA MABEL: Kyle don’t jump to conclusion, let Irvina tell you what going on.
KYLE: Mama stop pretending like every thing is alright cause you not blind you must see the empty             draw them.(he turns to Irvina) Irvina you better start from the beginning and don’t leave
nothing out.
IRVINA: (Rubs hands together as if to spread hand lotion on dry hands.)
KYLE: (Yells at Irvina)You better tell me every damn thing you know woman or me going to charge
you as an accomplice, and you can get jail time for that!.
GRANDMA MABEL: Nonsense Kyle! Watch you language and stop frightening the child. Irvina dear
tell us what going on. (her tone placating)
DAISY: Yes dear tell us what going on ( echoing her mothers comment)
IRVINA: (Irvina: a small framed 19 year old uneducated country bumpkin from the parish of St.
Ann’s. was a distant cousin of Kyle’s, whom he sponsored to the States to take care of his child.
Nora Kyle’s soon to be ex-wife recently returned from drug rehab.  While Nora was away the baby was temporarily in the custody of his father, and with Kyle’s earlier consent, Irvina had taken baby Joshua for a visit with his mother) Miss Nora was nervous ‘bout her and Mr. Kyle’s ‘pending divorce, she scared Mr. Kyle will get custody of she son.  Miss Nora say she couldn’t bears to not have she son living with she. Says she couldn’t bears not to seen him grown up into a man and she was just crying and crying.  She say she couldn’t win cause you Mr. Kyle has money and could hire you a good a  a tor  ony (Irvina stammered)
KYLE: Attorney, (correcting Irvina)…… for God sake Irvina stop stammering, and speak properly!
IRVINA: Ok Sir (she pauses then continues) Miss Nora had use up all the baby tissues drying up she
eye, so she sends me out to buys a box of tissues. Me was gone for one hour long cause the Five and Dimes store was crowded, today being pay day Friday and all.
When A comes back A meets Nora and baby Joshua in the drive way she said she soon come, she was running up to Miss Daisy’s for a while, and then she would drop off baby Joshua at you house.  Mr. Kyle. she said me could call it a day and me didn’t thinks nothing of it. A went back in side to get my things. A was on my way to the front door of the living room when I happen to look in baby Joshua’s room, that’s when A notice the open drawers and me went to close them and see that them was empty.  I look in the closet and notice that the suitcase was gone.  So A went to Miss Nora’s room and check she closet and it too was empty, me then panic and calls you.
KYLE: (Pacing up and down like a caged animal)
GRANDMA MABEL: (Nudges Daisy with elbow, and whispers so that Kyle couldn’t hear. You know             anything ‘bout this?
DAISY: How me must know?  Nora wouldn’t tell me something like that; all the same though the             woman got guts, taking a stand for a change against the wrath of me bad temper brother. I             mean, mama him is me brother and all but threatening to take full custody of Joshua is not right.
Poor Nora beg him for a second chance and she really trying to kick her drug habit and thing. And a his fault why Nora come a drug addict in the first place, him stashing all that drugs in ‘arms way’ where she could find it to get strung out on.  But she been clean for nine months and she working, him should a give her another chance.
GRANDMA MABEL: Daisy me agree with you, but she shouldn’t have take the baby
cause she know she can get in trouble.
DAISY: Well you know something mama; us women have to stick together.
GRANDMA MABEL: (Peers at her daughter curiously for she thought Daisy had a rather
sheepish look on her face). You know something Daisy?
DAISY: No! (turning head to hide eyes).
GRANDMA MABEL: If you mix up in it me no want to know.  Me know me son damn
arrogant and everything.  Maybe him deserve what him get.  Him don’t know nothing bout raising no child, and that gal Wanda that him seeing, I don’t think she cut out to raise no child either (pauses for a second looks at her son who was looking out the window and continues) All the same me hope Nora come to her senses and at least call one of us for we not her enemy and me anxious to know if my grandson is alright.
KYLE: (Turning from the window and as if to address his mother and sister, but really talking out loud

to himself) I can’t believe that bitch!  I’ll make her pay for this. (Picks up bottle of baby formula

from window ledge and broke down in tears.  Walks over to open drawer takes the piece of

GRANDMA MABEL and DAISY (Look at each other in astonishment. Then both stare at the tissue in

KYLE: (Kyle gathers composure reaches for the phone and dials 911) Officer I would like to report

Copyright© 2006 Gloria Cameron No portions of this play may be reproduced, mechanically, electronically or by any other means including copying. Without written permission of the publisher.  Published in Canada by Johnathan Walford & Sons Limited
Email ThisBlogThis!Share to TwitterShare to FacebookShare to Pinterest 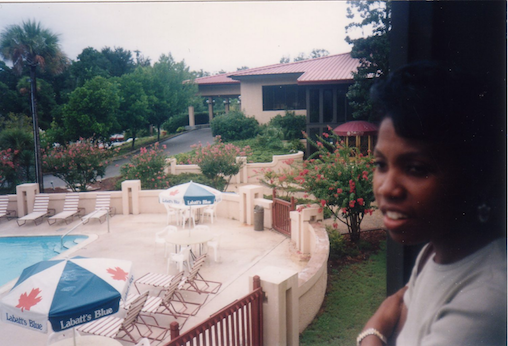 At Hilton Head Resort looking over the swimming pool 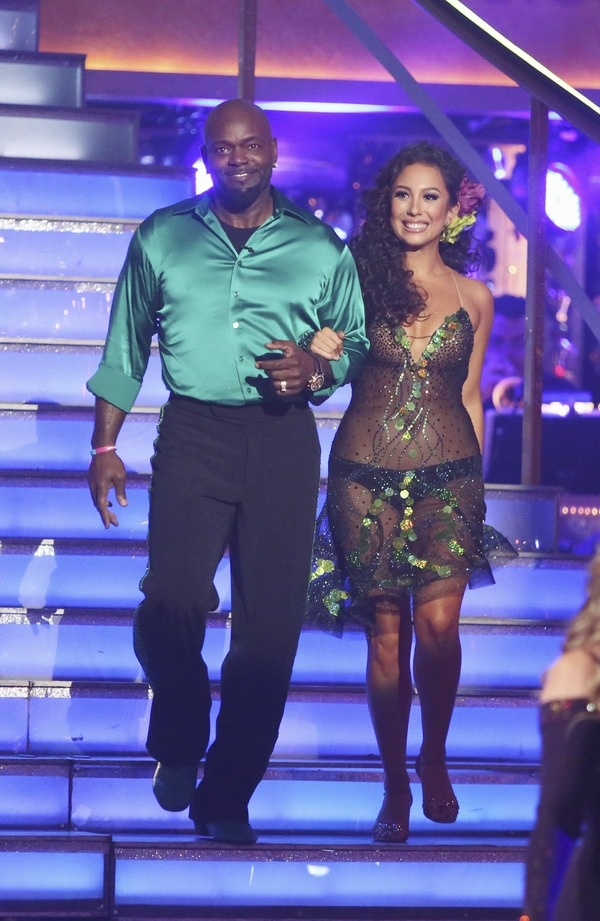 By Gloria Cameron aka IB

In the corner of the bedroom stands a carton,
A cylinder that house a Christmas tree.
Assorted goods for trade, a seaman’s cargo,
Escaped its belly since it came to me

All the same you would not know it if you see it,
I dressed it up, and it looks very lovely,
In its fineries blue, beige Chintz Floral Cotton,
It stands taller than its height a mere four feet

One can see its head but then again not clearly,
For it’s carrying a middle picture tube
Like a native woman under her fruit basket,
Though she sets hers down sometimes to take a breathe,

It’s a cousin to the nightstand, and the rosewoods,
And therefore in the décor fixture family,
And this musky smelling, disguised cardboard
Has become one of the most important piece